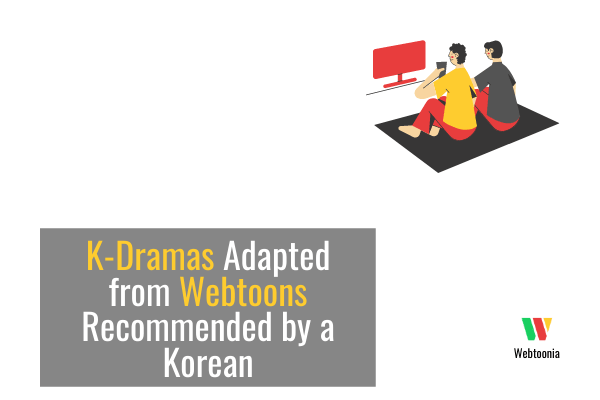 K-Dramas Adapted from Webtoons
Reviewed by a Korean

Here’s a complete list of K-dramas adapted from Webtoons reviewed by a Korean.

It includes the best from:

I’ve been a huge Webtoon fan for a decade. I’ll explain how well each K-drama has been adapted from its source.

Sweet Home centers on a loner high school student who hates leaving the house. He even skips a family trip and becomes the sole survivor when his family gets into an accident and dies. He doesn’t go to school and just plays online games at home.

One day, he notices monsters popping up at his run-down apartment. These creatures are somewhat cute in a twisted way, like the protein monster who wanted to be muscular when he was a human, and keeps saying “pro…tein”. Most are grotesque and creepy.

If you’re a fan of horror and didn’t read the Webtoon, Sweet Home is worth checking out on Netflix!

I only watched 2 episodes of the Netflix Original Series. Although Korean fans love the K-drama version, I prefer the Webtoon. It’s much better written and consistent.

Cheese in the Trap (치즈인더트랩)

Seol Hong is a model student who returns to university after taking a break. and gets intertwined with Mr. Perfect, Jung Yu, who’s a senior.

Jung is handsome, kind, rich and smart, and respected/adored by everyone at school. But for some reason, Seol can’t shake off a weird feeling about him.

She thinks there’s something off about Jung and doesn’t understand why he keeps messing with her. Cheese in the Trap not only offers thrilling romance, but also perfectly depicts Korean college life.

If you’re a fan of Korean romance and culture, Cheese in the Trap is a great show.

I finished both the Webtoon and K-drama, and found them enjoyable in different ways. Some Korean fans were furious with the drama version since the producer reflected her preference in the supporting actor too much. This made the story strange since they edited out the main actor.

There’s even a movie version! My preference in order is Webtoon > Movie >>>>>> Drama.

Jong-woo is a new tenant who gets an internship in Seoul at a small company his senior (선배) started. He moves into a cheap dorm (고시원 or Goshiwon | a super tiny room with shared bathroom and kitchen) and gets a strange vibe as soon as he enters.

The Goshiwon Ajumma acts friendly, but gives you the chills. Jong-woo meets other tenants like a gangster, guy who mumbles, guy who lacks hygiene and a super creepy big-eyed person. He finds everyone overly sensitive to everything, and he slowly becomes irritated and violent.

The Webtoon shows how other people can become hellish, especially in a big city.

Yes! The Webtoon has grotesque drawings and a story that will instantly grab your attention.

The K-drama, Strangers From Hell, shows highly synchronized casting with the original Webtoon characters. All the actors and actresses carry the show well.

Mirae used to get bullied for being ugly at a young age. She goes through plastic surgery before entering college and gets a new life.

Contrary to her hopes and dreams, she still gets negative attention because of her plastic surgery. She seeks inner beauty and pursues her interest in perfume, while experiencing campus life.

It’s not a typical fairy tale where the transformed protagonist gets everything. This drama’s about facing the bottom of harsh reality and finding solutions to her concerns with, of course, romance.

Yes! If you like Korean romance stories, both the Webtoon and K-drama are unmissable! You can find romance, and learn about social issues in Korea.

Another positive point is Do Kyung-seok (played by Cha Eun-woo), who’s unrealistically handsome, and looks like he walked right out of a comic book (만찢남).

Park Saeroyi dreams of becoming a police officer. On the first day of school, he sees Jang Geunwon, an heir to the infamous Jangga Co., beating another student and punishes him with his fists.

So, he gets expelled from school almost instantly. A year later, he loses his father and retaliates. As a result, he becomes an ex-convict for attempted murder, and can’t become a police officer anymore.

He decides to become a rich man to avenge his father’s death, and take down the nasty Jangga company. He saves money and opens a pub called “DanBam (or 꿀밤 | meaning Sweet Night, or Sweet Chestnut)” in Itaewon.

Absolutely! The Webtoon is amazing, and the Webtoonist wrote the drama script too. (The Webtoonist even runs an actual pub (꿀밤) in Itaewon.)

I haven’t watched the entire drama yet, but Episodes 1-10 and 14-16 received favorable reviews. I’ll definitely check it out.

This show is about the afterlife. Evil spirits exist on the other side and come down to Earth, possessing evil humans who resemble themselves.

Virtuous spirits also exist and ask for help from good-hearted people on Earth. They get superpowers and become “counter” to catch evil spirits.

The main character, Mun, loses his parents and becomes disabled after a car accident. One day, a virtuous spirit enters So Mun’s body accidentally, and he joins the counter team.

The Webtoon is great. The K-drama not so much.

The Webtoon is still ongoing on Daum Webtoon, and the story is amazing just like its original title, Amazing Rumor.
The K-drama is worth watching until around Episode 8. This is due to a change in the script writer in the middle of the show.

After that, the K-drama went south and turned into Magic Kid Masuri (an old Korean TV show for kids with embarrassing CG). The later episodes irritated me so much that I had to stop watching.

During the disastrous times of the Joseon dynasty after the war with Japan, starving people had to resort to cannibalism to survive.

A mysterious plague spreads throughout the country, and people start to become zombified. The Crown Prince heads for Jiyulhyeon down south to find answers from the former royal physician.

Totally worth it! I only watched Kingdom on Netflix. It perfectly depicts how Koreans used to behave and think. It’s also beautifully filmed and well-acted with awesome hats. The only downside for me was Bae Doona’s acting, which distracted me a bit with her modern accent and lack of emotion.

Jugyeong is a gorgeous influencer on Instagram with a secret. In middle school, she’s treated like a loser for not grooming and liking rock/heavy metal music.

She finally becomes pretty with her makeup technique and everybody calls her a goddess. Jugyeong then meets Suho and Seojun and you can probably guess what happens next.

Yes! Just keep in mind that the original Webtoon focuses more on illustrations than story in later episodes. True Beauty is perfect for when you crave something light, romantic and visually pleasing.

The K-drama version of True Beauty has received better reviews for its clear/different story than the Webtoon.

A merry band of four misfits travel the galaxy in search of salvage and adventure. They stumble upon a shocking secret while trying to trade some space junk.

I haven’t started watching the K-drama version on Netflix yet, but the Webtoon is a lot of fun.

Did we miss anything?

K-dramas based on Webtoons are becoming smash-hits.

Let us know your favorite ones in the comments!