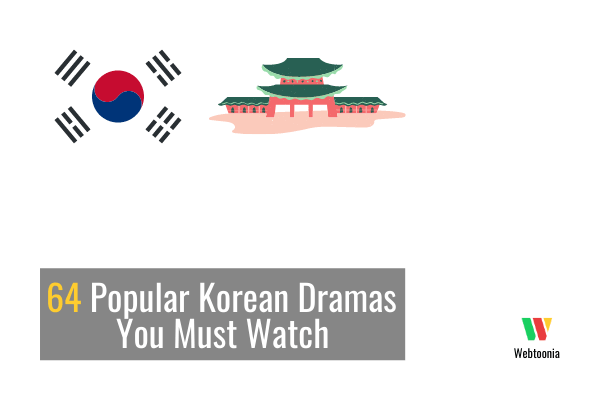 64 Popular Korean Dramas You Need in your Life

This post lists all the most popular K-dramas in alphabetical order.

I’ve even included a K-drama bingo card you can play.

Here are the synopses of 64 K-dramas in alphabetical order. All of them are highly acclaimed in South Korea.

I especially recommend watching the ones with a ★!!

A fantastic heavenly romance between a ballerina, who doesn’t believe in love, and a troublemaker angel, who claims to be her cupid.

A love triangle between two women with the same name and a man. It all starts with a misunderstanding!

A special love story between a woman, who transforms into someone else for a week every month, and a man, who suffers from prosopagnosia (face blindness).

A calculative romance between a ‘homeless’ girl, who envies a landlord the most in the world, and a ‘house poor’ guy, who actually owns only the porch area.

Cheese In The Trap (치즈인더트랩)

A Webtoon-based romantic thriller about a Mr. Perfect, who conceals his manipulative nature behind a charming smile, and an extraordinary girl, who sees through his act.

A top-secret love story about a South Korean heiress, who accidentally lands in North Korea, and a North Korean army officer, who protects her.

(Hyun Bin and Son Ye‑jin started a relationship after filming Crash Landing on You!)

A melodrama that depicts the value of life through young soldiers and doctors. It’s about their dreams of love and success in the extreme environment of an unfamiliar land.

(Song Joong‑ki and Song Hye‑kyo got married after this drama, but unfortunately, they’re divorced now.)

A medical drama about doctors who overcome their tragic past, become mature and start love once in a lifetime.

A romance between a macho reporter, who isn’t the jealous type but ends up begging for affection, a rich guy, and a weather girl.

A story of ‘real doctors’ that features Teacher Kim, who’s a geek, but genius, in a small hospital, and passionate young doctors.

The second season of Dr. Romantic that focuses on a true story about doctors.

A youth music drama with students at Kirin High School of Art, who try their best to become stars.

A romantic teen drama with a high school girl who overcomes her destiny and achieves love.

A romantic drama about youths, who want to go ‘my way’ no matter what others say; even in the harsh reality that forces them to have substandard lives.

A love story of a news anchorman, who remembers every moment of his life due to hyperthymesia, and a passionate actress, who has lost her memories.

A mystery melodrama about the hidden secrets of a Jaebeol (conglomerate) family and the story of the risk management team.

A mystical romantic tale of a goblin (guardian) who needs a human bride to end his immortal life; an amnesiac grim reaper who becomes a housemate of the goblin; and a girl who claims to be the bride of the goblin.

A romantic story of a girl, who’s the perfect art gallery curator, but secretly a huge fan of K-pop idols, and her grumpy boss Ryan.

A beautiful drama that shows the amazing chemistry between 20-year-long friends who work at the same hospital and share a love for music.

An enthusiastic story about the newly appointed leader of the weakest baseball team who prepares for the new season.

A special story of a beautiful yet grumpy CEO who has been running Hotel del Luna that caters to ghosts, and an elite hotelier who becomes the manager there.

A hyena-like survival drama of attorneys who keep laws in their heads but money in their hearts, while they tear into each other.

An addictive drama about a team made of a sharp female lawyer, a public defender and a high school student with a mysterious superpower to bring down a killer.

A trendy youth drama that depicts the love and friendship of super-rich high school students.

A Webtoon-based startup myth about an ex-con and his friends who pursue freedom with their own beliefs and values in Itaewon.

A drama with modern people in Korea who overreact to small scratches, but live with an illness of the mind.

A romantic comedy about a super rich man who has dissociative identity disorder of 7 personalities, and a first-year psychiatric resident who becomes his secret doctor.

A fantasy romance drama based on the story of mermaids from Eou Yadam (어우야담 | a collection of stories written in the Joseon Dynasty).

A foodie drama about single-person households at Sejong Villa with a restaurant blogger, a freelance writer, and a gentle civil servant.

A retro mystery drama about a detective in 2018 who tries to recollect the past, and a detective in 1988. It takes place in 1988 and keeps you guessing if it’s a dream or reality.

An unpredictable romance story about a crown prince who falls in love with his eunuch, who’s actually a woman in male attire.

A Webtoon-based romantic comedy about a superstitious girl who believes in fate, and a CEO of a game company who’s into math and science.

A Webtoon-based drama where a guy who fails to become a professional Go player is thrown into the cruel corporate world. The drama gives you a peek at corporate life in Korea.

A time travel fantasy about the 4th prince who’s like a wounded beast, and a Goryeo girl whose soul is from a 21st century woman.

A drama about a Korean boy who ends up in the States after Shinmiyangyo (1871) and returns to his home country ‘Joseon’ as an officer with the American military.

A miraculous romance between an alien who was stranded on Earth 400 years ago, and a top celebrity who’s childish but gorgeous. Jun Ji‑hyun plays Cheon Song‑yi and it’s actually quite good.

A spirit possession romance between a timid kitchen assistant possessed by a lustful maiden ghost and a famous chef.

A drama that depicts the process of a progressive woman in her 30s, who looks back on her long-term relationship and realizes her new feelings for love.

A drama that shows the life of people in Korean prison with a professional pitcher who suddenly ends up behind bars.

A nostalgic and comedic drama about 5 families living on the same street in Ssangmun-dong, Seoul in 1988.

A nostalgic drama about college students from the countryside who become a big happy family at a Seoul boarding house in 1994.

A heartwarming nostalgic drama about a high school girl who was obsessed with a boy band, and her 5 friends in 1997 represented by H.O.T. and SECHSKIES.

A real romance between career women at a trend-leading search engine company and men who try to stir their hearts.

A romantic fantasy drama about a poor stunt woman and a millionaire department store owner as their souls switch.

A quirky romantic comedy between four childhood sweethearts: a girl who changed for the worse, a guy who changed favorably, a perfect-looking girl with shortcomings, and a mysterious, cheeky guy.

A crime-investigation drama where a profiler in 2015 and a detective in 1989 collaborate to investigate old unsolved cases through a special walkie-talkie.

A satirical drama that shows the gruesome desires of housewives who want to make their husbands more successful and their children enter Seoul National University at prestigious Sky Castle.

A love story that will make your heart race. As its Korean title suggests, “Pretty Noona Who Buys Me Food”, this drama is about a career woman in her 30s who tries to be nice to her best friend’s younger brother, and falls in love.

A romantic comedy between a woman who goes into a coma at 17 and wakes up at 30, and a guy who has been secluded from the world.

An investigative drama that uncovers a prosecution-sponsored murder case and the truth behind it, with a prosecutor who has no empathy and a police lieutenant who’s just and warmhearted.

A romantic drama between a woman born with tremendous strength, the second-generation heir of a Jaebeol (conglomerates), and a policeman with a strong sense of justice.

A drama that describes the superficial relationships of young people. A girl trying to be a writer and a guy who dreams of becoming a French chef start talking online. They meet in real life and find out how different they are.

The Guest (손 the guest)

A drama about a psychic, a priest, and a detective who fight crimes committed by supernatural forces throughout Korean society.

A heartwarming drama about a woman who loses all her time given, and a man who gives up all his beautiful time by living a dull life.

A 100% realistic drama of TV producers and a pop star in the entertainment department. They overwork every day, stay up all night, and have Nunchi (Korean concept of the subtle art and ability to gauge others’ moods) and stamina for survival and success.

A romance novel-based drama about a famous actress who somehow ends up getting a job at a law firm, and meeting a lawyer who’s a perfectionist.

A cold, yet heartfelt love story about a couple who painfully breaks up as children, but reunites as a snobby top actor and an obsequious documentary producer.

A thriller drama about a voice profiling team (112 call center – golden time team) trying to listen to every little detail to catch a killer.

A romantic suspense melodrama with a Webtoon world setting. Things escalate when a surgical resident accidentally gets sucked into the world of a popular Webtoon “W”, which was created by her father, meets the protagonist, and becomes entangled in a murder mystery.

A heartwarming youth drama about the first love of a twenty-one-year-old weightlifter.

A romance between a narcissistic vice-chairman with wealth, looks and skill, and a secretary who perfectly assists him.

A story of real Korean people with a single mom trapped in prejudice fighting all the biases, and a police officer who helps her in a small town.

A spectacle melodrama about a quack surgeon who operates for anyone anywhere if a large amount of money is paid, and a Jaebeol (conglomerate) heiress in a medically induced coma.